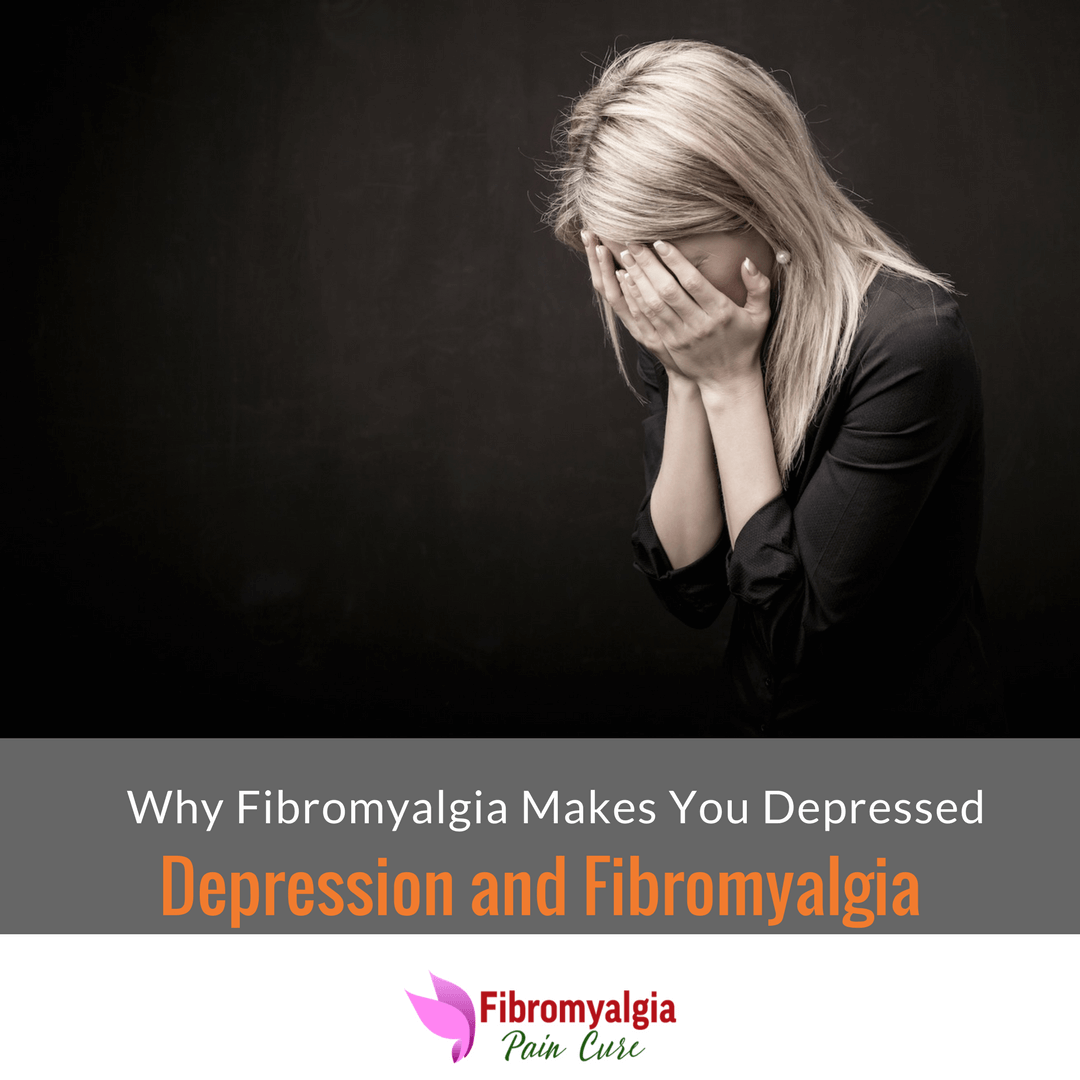 Have you ever thought why fibromyalgia patients are often depressed?

Before we address that question, we need to know that fibromyalgia patients have two pervasive symptoms.

One is a chronic pain, and the other is a risk of getting into depression.

Now it is indeed no fun to live with non-stop chronic pain which makes you unable to do anything else.

More than 20 percent of fibromyalgia patients who suffer from chronic pain develop the risk of depression.

So what can we do to overcome this condition?

Let's go through ways you can overcome your pain, and strategies to reduce the chance of developing depression.

Fibromyalgia and depression: Linking the pain and perception

The lack of proper sleep increases the pain due to a decrease in the production of growth and muscle repairing hormones.

A neuroimaging study of the brain of fibromyalgia patients have shown them to be more sensitive toward the pain. The grey matter volume in the brain found to be not uniform. There is a significant decrease in the cortical thickness across the brain. This reduced thickness increases the pain perception in the people.

The increase in pain makes people depressed. In several clinical studies, it was clear that if untreated, depression may lead to suicidal thoughts. The longer duration of persistent pain changes how the brain responds to the pain.

​ Read How Boosting Serotonin Can Help with fibromyalgia symptoms Effect of depression in fibromyalgia

Depression causes many visible and invisible changes in the person and their personality. A person going through depressive experience often lacks energy, becomes miserable, and lose interest in activities.

The above changes affect not only the person with the fibromyalgia condition but also people surrounding him such as family and friends.

At a more significant level, depression causes enormous productivity loss as it increases absenteeism and lack of focus.

Medication for fibromyalgia and Depression

There is no universal medication which treats fibromyalgia. The conventional medicines prescribed for fibromyalgia patients are painkillers or anti-inflammatory drugs.

But these drugs often have several other side effects. It makes them to be not suitable to be used for long-term.

Since depression and fibromyalgia conditions are linked with each other, many FDA approved drugs such as Cymbalta, Savella, and Lyrica contain both pain-killer (opioids) and anti-depressant.

Now how much you have to use these opioids are debatable as there are no universal guidelines.

The main disagreement is between the long-term effectiveness of these drugs and the risk of dependency.

For example, a low dose of non-opioid such a paracetamol combined with an opioid such as codeine are often ineffective. Anything more used for long-term may increase the risk of cancer and heart disease.

Due to these adverse effects, many developed countries such as Europe and Canada do not recommend the prescription of stronger opioids. These drugs are meant to be only used in emergency scenarios and for shorter-duration.

SSRI and Gabapentin based drugs are more effective than SNRI based. Pregabalin is the most commonly used medication for fibromyalgia patients. Fortunately, we do not have to rely on these side effect producing drugs to get relief from pain and depression.

Let's find out how you can get relief naturally.

New research have found that eating a healthy diet reduces the possibility of depression. The study conducted on 16 randomized controlled trials over 45,000 participants showed a significant association between dietary improvements and symptoms of depression and anxiety.

All types of healthy diets such as those designed for weight loss, fat reduction or improvements in nutrients level have an equally beneficial effect on reducing the symptoms of depression. This is also true for those who are not diagnosed with depression.

Adopting a healthier diet can boost people's mood, so they do not get depressed. The research had suggested that to see improvements in health, the dietary improvements have not to be highly-specific or specialized.

All types of healthy diet have a positive effect on mental health. By eating foods which are high in fibers, rich in nutrients while cutting back on fast-foods and refined sugars have a positive impact on health.

Studies had also found that women had more substantial benefits to their symptoms of depression when they switched to a healthier diet.

It might seem absurd to suggest doing exercise while in pain. But exercise can help you relax your muscles and release a mood-boosting chemical called endorphins which fight the depression.

Let's be clear that exercise alone will not help you with depression. Exercise will help you to regulate the adrenaline levels in the body which helps with anxiety, but you have to treat other symptoms as well.

Research published in the Journal of Psychiatry had found that exercise reduces symptoms of depression. Depressed adults who took part in the study found more significant improvements to their depression and anxiety after 12 weeks of training.

From a practical standpoint, it is important to be aware that if you are depressed, then you might not be very motivated to start exercise. So it is essential that you start a slow and enjoyable activity. Then you can gradually improve the intensity and exercise pace.

It is recommended to do exercise 20 minutes per day, 3 times per week, at a moderate intensity to reduce the symptom of depression.

There is a strong link between the quality of sleep you get and depression. Studies have found that three-quarters of depressed people to have sleep disorders.

Sleep is essential for the body, and you have to address any sleep-related ailment first before you start treating depression.

Depression often causes people to have disturbed sleep. There is a change in the movements of eyes while at sleep and the brain activities get disturbed.

Following good sleep routine such as going to bed on time, not drinking tea or coffee for 3 hours before bed, and keeping yourself active will help you improve your sleep.

Your thoughts affect your mood. You have to consciously make an effort not to let negative thoughts influence you. Don't isolate yourself and seek support from family and friends to keep you engaged and happy.

Find some creative ways to engage yourself in activities which you like to do. Laughing and having fun will boost your mood and keep the depression away.

A lack of magnesium in the body results in the development of depression and anxiety. Magnesium deficiency causes muscle tightness and cramping.

These tight muscles make you feel tense and uncomfortable. Magnesium is a natural muscle relaxant and essential for nervous system regulations.

It also helps repair the brain cells which increases your brain's ability to heal itself. Anxiety and depression go hand in hand, and magnesium is a safe, effective and low-side effect option for treating depression.

You should be able to get enough magnesium through your diets such as consuming dark leafy vegetables, seed, and legumes.

But in our modern day living, it is increasingly getting difficult to get the required amount of 310- 420 mg per day magnesium through diet alone.

Use of alcohol and people who take calcium supplements also affects the level of magnesium in the body.

You should supplement magnesium with a small dose of 150 - 300 mg a day. It is essential to pay particular attention to the type of magnesium used in the supplements. Some cheap magnesium supplement will contain filler minerals such as oxides.

You should be looking for the magnesium citrate amount in the supplement. Some supplements are called "Chelated" magnesium which means mineral has been combined with amino acids for easy absorption.

It is also safe to take magnesium, as if you overdose then the worst may happen is to have upset stomach for a while.

Getting organized and following a predetermined schedule will reduce anxiety and uncertainty. Better organization and plan for the work and personal life will make you in control of your life.

It will reduce stress and make you better prepared for the unexpected. Stress causes the chemical change in the brain which results in the depression.

With an organized and disciplined life, you will be overcome negative thoughts and bring positive change to your life.

Have you suffered with depression while diagnosed with fibromyalgia?

We would love to hear your experience in the comment below.

You can also join the discussion at the Fibromyalgia Pain Cure Facebook Page which is dedicated to a discussion of natural treatment for fibromyalgia and other chronic pain conditions.

How To Get Relief From Fibromyalgia Muscle Pain