Your Neck Can Trigger Fibromyalgia Symptoms: How To Prevent It 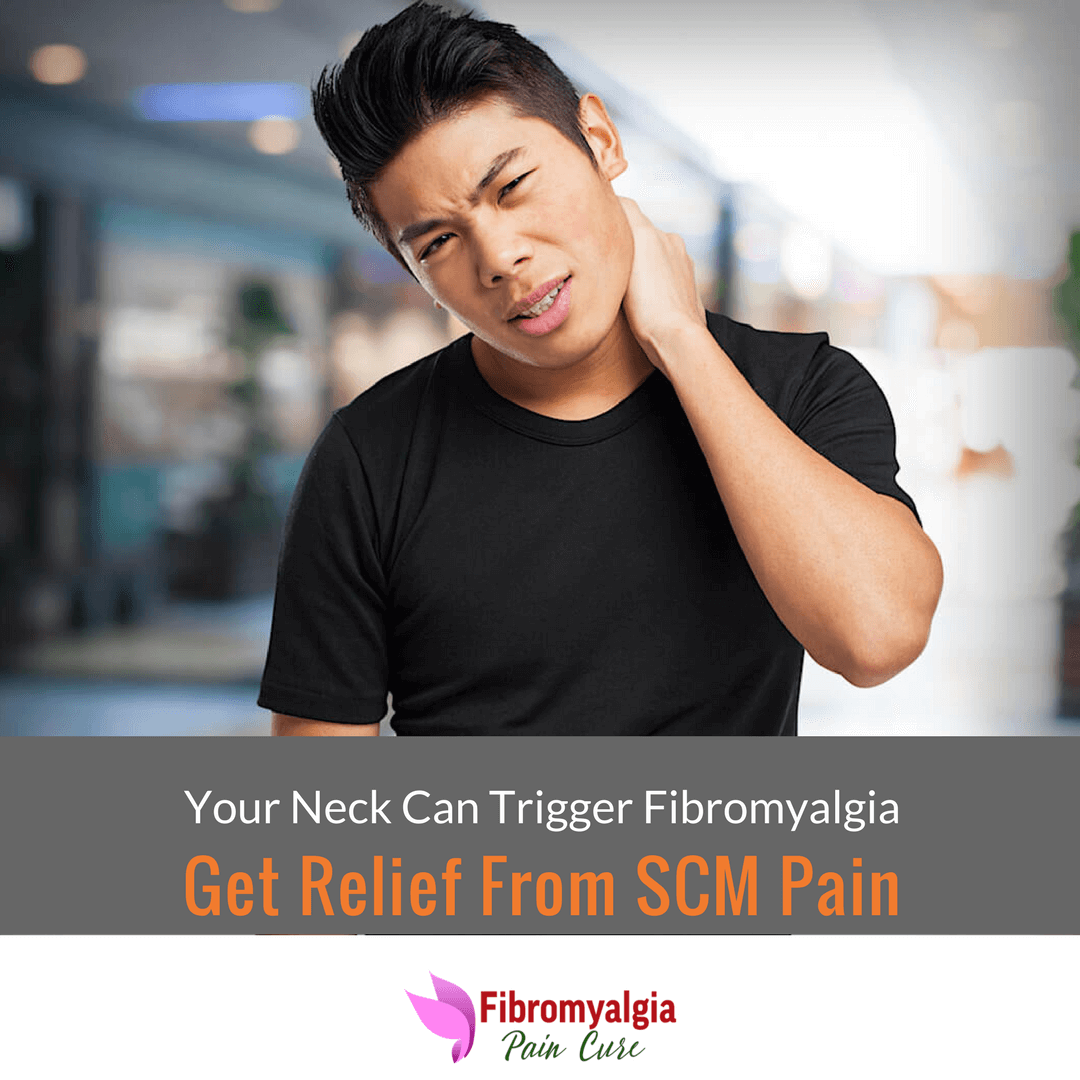 Have you ever thought that your neck can trigger fibromyalgia symptoms?

The fibromyalgia has several signs and symptoms which include deep muscle pain and painful tender points.

The tender points can be above and below the waistline along the both side of the body.

The muscle pain along the neckline can have several indirect s﻿ymptoms in the fibromyalgia patients.

Dizziness, headache or a migraine in the fibromyalgia patients are thought to be originating from the brain, but actually, it can also be triggered due to stretched out sternocleidomastoid muscles (SCM).

The sternocleidomastoid muscles go around the neck, and the nerves along it make you feel like the pain is coming from inside your head. The main reason is that several nerves connect from your torso to the head which goes along the neck.

A stretched out sternocleidomastoid muscle may have symptoms such as dizziness, headaches, or nausea.

Have you wondered why women are more affected by fibromyalgia than men?

What is Sternocleidomastoid Muscle

Around our neck, we have two paired muscles which are known as sternocleidomastoid muscle or SCM. These are the two large muscles along the front on both sides of the neck. SCM muscles are attached between the collarbones and the base of our throat to the joint behind our ears. The primary purpose of these muscles is to support the head and rotate the head to the opposite side.

The sternocleidomastoid muscles wrap around the edge of the neck.

Everyone have one sternocleidomastoid muscles on each side of the neck. When we want to move our head around, these muscles contract or relax to increase or shorten the muscle length and pull the head on either side or just keep it in balanced.

These muscles have two components; the sternal and clavicular divisions. The accessory nerve inside the spinal cord around C1-C3 sends the signal to these sternocleidomastoid muscles to response. These muscles help you to rotate your head along each aside and move the head downward.

Fibromyalgia patients can be more prone to neck pain due false signal send by the central nervous system to the accessory nerves which can cause the sternocleidomastoid muscles to get easily inflamed.

Sternocleidomastoid muscles also help us perform a respiratory function by raising the chest bone when we inhale. We can wear down these muscles quickly if we breathe from the chest rather than with the diaphragm.

Another function of sternocleidomastoid muscles (SCM muscles) is to helps us with chewing and swallowing.

You can feel these muscles with your hand if you turn your head around. You will see one side of muscle stretched alongside the neck.

SCM plays a vital role in our body and is extensively used by us as we move our head around.

What Can Cause Sternocleidomastoid Pain?

There may be several reasons you can have sternocleidomastoid muscle pain. These pains can be either temporary or can be a long lasting recurring pain.

Some of the common cause for sternocleidomastoid muscle pain (SCM muscle) can be due to:

These conditions can be easily corrected by changing the external environment and being aware of your body posture. Some common ways you can get relief from sternocleidomastoid muscle pain is by:

What are the Sternocleidomastoid Trigger Points?

There are seven Sternocleidomastoid Trigger Points in the muscle which makes it to be the one of the highest trigger point density in the body. The sternal division pain is felt deep in the eye socket, above the eye, cheek region, upper chest, and the back and top of the head.

The clavicular divisions' pain is felt in the forehead, deep in the ear, behind the ear, and around the molar teeth.

But how do you know if your pain is due to strained sternocleidomastoid muscle?

The problem with the strained or shortened sternocleidomastoid muscle is that it rarely hurts regardless how stiff or tighten it may be.

Most of the time the sternocleidomastoid muscles pain have symptoms in the area of head, neck, ears, eyes, nose and throat. This causes many misdiagnosis and wrong treatment.

For example, many migraines or headache pain are thought to be related to other fibromyalgia symptoms rather than actually it being caused due to stretched out sternocleidomastoid muscles.

The strained sternocleidomastoid muscles can produce many neurological disturbing symptoms of its own and may make you feel dizzy or disoriented.

A case study conducted by Babak Missaghi, and published in The Journal of the Canadian Chiropractic Association, a patient diagnosed with dysfunction with SCM muscle resulted in the head and face pain, nausea, dizziness, and lacrimation.

The tightened SCM muscle cause the trigger points within both sides of the head. When your sternocleidomastoid muscle pain are triggered, then you might see a variety of unpleasing symptoms.

These symptoms can be intermittent which lasts from few minutes to few hours at a time and with a frequency of three to twelve occurrences per week.

Some of the common SCM symptoms are:

Below video is the quick demonstration of releasing SCM trigger point.

SCM trigger points can be quickly released by massage. You should consult a chiropractor or registered professional massage therapist who typically use the thumb or forefinger to squeeze the muscles gently to relax the muscles.

You can also release SCM by yourself by following method.

To relieve the sore point in the Sternal Division, turn your head entirely to the side of the muscle which needs to be stretched and then move your chin downward toward the shoulder.

Keep it in the same position for few seconds and then bring it back to the neutral position.

To relieve the tender point in the Clavicular Division, turn your head onto opposite side of the stretched muscle and slowly raise your chin upward for few seconds and then bring it back to the neutral positions.​

Neck retraction exercise is easy to do anytime when you have sternocleidomastoid muscles pain and does not require much effort.

To do neck retraction exercise, you pull your chin back and align it neutrally with your spine. Hold the chin retracted to 20 to 30 seconds.

It is also known as posture exercise as you should keep your body posture in a straight line by keeping head to be supported on your shoulder and then to your spine.

This exercise helps relieve many posture related deficiency such as forward head posture which tightens the SCM.

To do chin raise exercise, you rotate the head toward the left or right side and then gradually bring the chin up such that you are looking upward. You have to be careful not to drop down the chin to the chest.

Like any other muscles in your body, you can do certain targeted exercises to strengthen the sternocleidomastoid muscle.

The stronger SCM muscle will help you to not only release SCM trigger points but also makes it less susceptible to SCM triggers.

Best of all you do not need any specialized equipment to perform SCM exercises and can be done anytime and anywhere.

Use of SCM Pain Relief Gel.

If you have severe pain due to stretched SCM muscle, then there are certain gels which you can apply to get immediate relief from the SCM pain.

These pain-relieving gels absorb quickly through your skin and provide immediate relief from the painful condition. Although there are several gels in the market. You can also try Sombra Warm Therapy Natural Pain Relieving Gel which you can order it online.

If you are suffering from fibromyalgia flares such as a headache, migraine, dizziness and pain around the face, then understanding the real cause is important to get effective pain relief.

You can follow the above strategies to get relief from the sternocleidomastoid muscle pain.

You should consult your doctor if you still have pain, and numbness in your face or feel dizziness with no visible sign of improvement.

Have you experience sternocleidomastoid muscle pain?