Why Fibromyalgia Pain Hurt So Bad 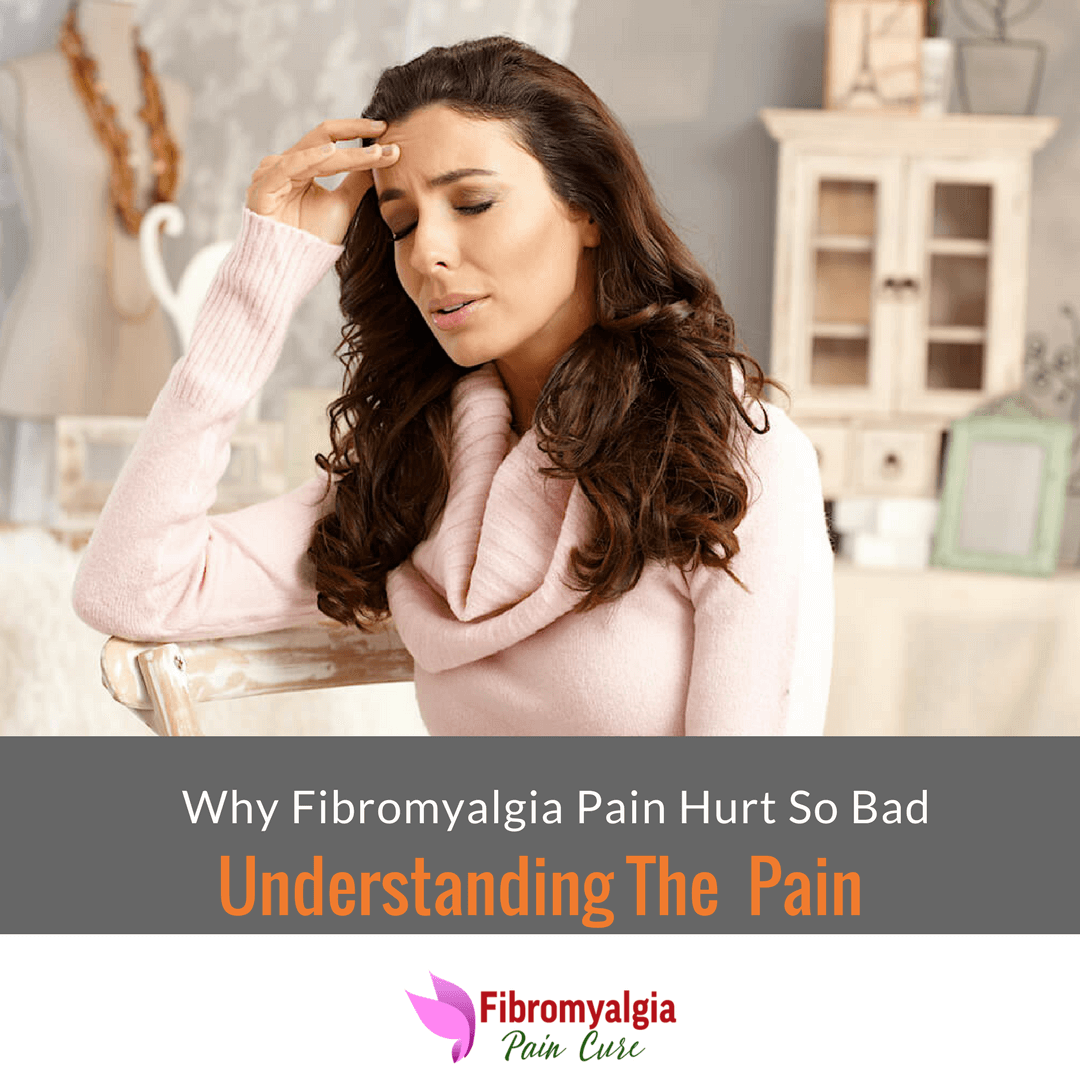 Pain is the hallmark of fibromyalgia condition.

Almost all of the fibromyalgia patient experience some form of the painful condition. The fibromyalgia pain is different than that of from a headache, toothache, stomach cramp or swollen joint.

The common fibromyalgia pain is a type of stiffness or aching, often associated with spasm.

The main reason for this different response to the drug is due to a difference in the origin of the pain.

Understanding the pain and effective pain management technique will help you manage your fibromyalgia pain.

To properly understand the cause of fibromyalgia pain, it is useful first to know how we perceive pain and the source of pain.

We have billions of nerves in our body which carries signals from the different part of the body.

These signals travel from the originating tissue to the spinal cord and then transmits to the brain.

The brain and spinal cord comprise the central nervous system.

There are two types of nervous system.

When we get injured, the pain signals from the wounded tissue triggers specialize nerve cells called nociceptors.

At this junction, the pain signal is either increased or decreased before sending it to the brain.

The amplified or reduced pain signal from the dorsal horns then travel to the part of the brain called thalamus.

In fibromyalgia patients, the pain signals get amplified in the spinal cord before sending it to the brain and this persistent state of high reactivity is called “central sensitization.”

Central sensitization causes the changes in the dorsal horn of the spinal cord at the receptors site. These changes get triggered due to injury or trauma.

The junction of incoming periphery nerve and the outgoing nerve to the brain is called synapse.

The chemical released at these sites are glutamate and substance P, also known as neurotransmitters.

The glutamate released from the peripheral nerve attaches to the receptor on the second nerve which further travels to the brain. For controlling the pain, the brain sends a signal called descending modulation which inhibits the transmission of the pain signal from the periphery to the brain.

That is a form of pain control management from the brain.

Antidepressant medications such as amitriptyline and duloxetine reduce pain by inhibiting the pain signals to the brain.

Whereas Anti-epileptic medications such as gabapentin, pregabalin minimize the pain by limiting the release of glutamate neurotransmitters.

Stress is very common trigger in fibromyalgia patients. It is estimated that 2% of the population of nearly any country has mild to severe fibromyalgia symptoms. The most common factors for fibromyalgia trigger beside stress are physical or psychological trauma, distress, infections, and inflammation.

How Does Fibromyalgia Start

Fibromyalgia is a condition which can affect anyone, but women in their mid-twenties or thirties are found to be more affected by it than men.

It is important to note that there is no one single symptom of fibromyalgia and many patients first seek treatment for persistent pain or fatigued but do not find any relief from these symptoms.

These patients then gradually start experiencing other fibromyalgia symptoms such as low blood pressure, dizziness on standing, frequent headaches, irritable bowel and bladder symptoms and numbness or tingling in hand and feet.

For the majority of patients, the blood work does not show any abnormalities which further frustrates the patients.

It is hard for the physicians to confirm the fibromyalgia condition trough any lab test and complicating further, these symptoms are not unique as similar symptoms can be caused by anemia, hypothyroidism, and chronic fatigue syndrome.

Fibromyalgia patients often do not look sick which makes other too often misunderstood them.

Fibromyalgia is not a disease. It is a syndrome which is a collection of signs and symptoms which exist together but does not relate to a particular cause.

On the other hand, a disease has a specific cause or causes and has recognizable sign and symptoms.

Fibromyalgia is understood to be due to “over activity of pain-sensing nerves.” The pain signals send to the brain, and spinal cord increases significantly in fibromyalgia patients which make them hypersensitive to the pain.

The stress response mode is locked in the nervous system which triggers the “fight or flight” instinct.

In this way, the senses become hyperactive, and the brain continues to pump adrenalin and tightens the muscles to prepare for any swift reaction.In a healthy person, when no threat happens the brain goes back into normal state and relaxes the muscles and reduces the flux of adrenaline.

However, in fibromyalgia patients, this continuous hyperactive mode disturbs the deep sleep, keep muscles tense which leads to pain and tenderness, impair the digestion and throws the hormones out of balance.

But we need to understand why does brain gets stuck in this fight or flight response. Multiple research has been conducted to explain this peculiar brain behaviour, but there has been no scientific backing yet to understand the cause of fibromyalgia entirely.

Be aware of your surrounding and pay close attention to the factors which generally trigger your fibromyalgia symptoms.

Doing regular exercise and eating balanced and nutrient rich diet can not only help you cope with fibromyalgia flares but also help you to have overall good health.

One possible link has been due to genetic.

Fibromyalgia tends to run in families like diabetes, heart disease, and other chronic illness.

Fibromyalgia patients are more likely carry genes for a dysfunctional enzyme that normally breaks down the chemical messengers of the fight-or-flight nervous system.

Other risk factors such as trauma, abuse, accidents, post-traumatic stress disorders (PTSD) can trigger the fibromyalgia symptoms as well.

A mixture of these physical and psychological wounds are commonly cited reasons for fibromyalgia triggers.

There are several different symptoms of fibromyalgia, and not everyone suffers from the same symptoms. Some people experience one or more symptoms to be far severe than the other, and often these symptoms overlap with other chronic conditions. Fibromyalgia causes pain in the multiple connective tissues. Rheumatologist found that these patients have very typical 18 tender points in the muscles; on both sides of the body, just under the knees and elbows, in the lower back and gluteal region, and in the neck and over the second rib, near the breastbone.

It is interesting to note that these tender points seem to be inflamed, but when examined there is no inflammation.

Fibromyalgia flares are symptoms which many people experience when their condition is triggered.

Some of the common symptoms of fibromyalgia flares are:

Not everyone will experience all the symptoms, but some symptoms will be more prevalent in one than the other.

Some of the severe fibromyalgia symptoms are chronic pain, headaches which feels like migraine pain and numbing and tingling in finger and foot like paresthesia.

What Is A Future Of Fibromyalgia Patients?

Diagnosing fibromyalgia brings both a relief and stress in the patients.

It is a relief because now they know the name of the problem they are having and stress because they don’t know whether there is any permanent cure for this condition.

Two most common questions by fibromyalgia patients are, “will this pain ever go away,” or “is there any treatment available.” Learn How You Can Get Relief From Pain Without Any Drugs

The first step in finding effective fibromyalgia treatment is to find a physician who believes the fibromyalgia exist and want to help you with this disorder.

It is very frustrating to get proper treatment from the doctor who does not believe that you have existing fibromyalgia condition.

The second step is to understand as much as you can about your body and the common trigger points.

For example, if you notice that after certain activity or eating something you feel tired and your fibromyalgia symptoms are up then make a list of those trigger points and make changes in your lifestyle or diet to avoid activating the trigger points.

The third step is to remain positive and hopeful. Although it is a chronic condition, there has been so much research underway that in near future researchers might be truly able to understand this painful condition and find a permanent solution.

How do you deal with fibromyalgia symptoms?