Why Your Promising Fibromyalgia Medicine Not Working? 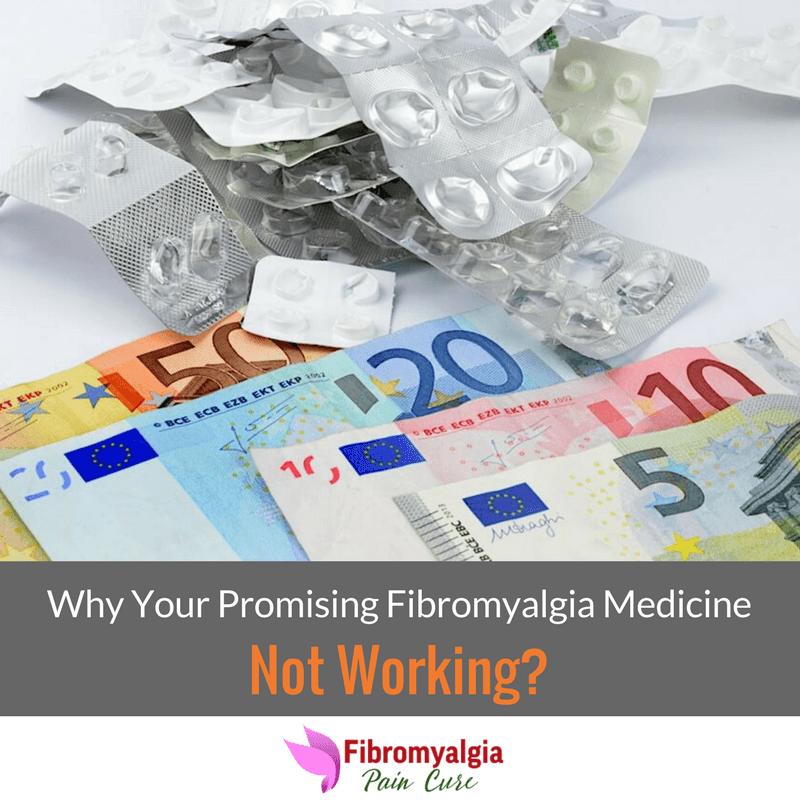 Do you or someone you care have fibromyalgia?

I bet you then that you might be looking for that one silver bullet which will take away all your pain and frustration and bring your life back to normal.

The cause of fibromyalgia is still debatable but research have shown that in fibromyalgia patients the nervous system does not process information the right way and this causes the problem in actually treating this illness.

In Canada Pregabalin (Lyrica) is approved by Health Canada and it is supposed to help with pain and sleep including reducing anxiety.

Gabapentin is also approved by Health Canada, but not for fibromyalgia although it works similar to Lyrica.

Cymbalta and Savella are antidepressant, but these are used to treat chronic pain and to help people boost their energy.

Savella is approved for use in U.S, but it is not available in Canada.

Cymbalta is available in Canada to prescribe to fibromyalgia patients.

Like any other conventional medicine, these Fibromyalgia medications have common side effects, but the important question is whether it is more beneficial in treating pain and other symptoms than causing adverse side effects.

Let's see how effective these drugs are to provide relief from fibromyalgia symptoms.

Lyrica is a pregabalin capsule developed by the one of the biggest Pharma Pfizer Inc.

It is also the first FDA-approved drug prescribed to fibromyalgia patients.

As per Pfizer, the Lyrica is helpful in:

For fibromyalgia patients, the recommended dose is 300 to 450 mg/day.

Lyrica works by binding to specific sites in the nerve tissues which has pain relieving and antiseizure properties.

Some of the common side effects of Lyrica are: Can the risk of Lyrica side effects outweigh the benefit of reducing pain in fibromyalgia patients?

As per Lyrica website, it claims that patients taking Lyrica has less pain than patients receiving a placebo, and this makes them feel better compared to other medication.

That sound all promising but can those claim stand based on the clinical trials?

Pfizer conducted a field test in patients 12-17 years of age across the different countries (U.S, Taiwan, India, and the Czech Republic)

This clinical trial was conducted over the 15 weeks’ period where the patients were either given Lyrica or placebo (sugar pills) and then followed by a six month of Lyrica dose.

The majority of the test patients were females (86%)In the first trial stage, the pain score for the users of Lyrica was no statistically significant than the patients taking a placebo.

However, there was some improvement in the pain score when Lyrica was taken beyond 15-week period.

Here is the result summary of Lyrica clinical trial: In another study, now with adults, the patients were treated with a minimum of 300 mg/day Lyrica dose.

The conclusion was somewhat similar to the previous clinical trial of the adolescent patients.

The outcome of this trial was that the Pregabalin(Lyrica) use in treating the pain, sleep and fibromyalgia symptoms were significant; however, there were a large proportion of patients who experienced adverse side effects.

It is ironic that some of the side effects such as dizziness, headache, sleep trouble, trouble concentrating and swelling in hands and feets are the exactly the fibromyalgia symptoms we are trying to cure.

Cymbalta (duloxetine) is an antidepressant and works by restoring the chemical balance in the brain. It is mainly used to treat depression and anxiety in the adult and children.

Cymbalta is not to be used if someone has untreated or uncontrolled glaucoma or if they have thioridazine.

Cymbalta is commonly prescribed by the doctors to treat fibromyalgia symptoms as well.

Some of the common side effects of Cymbalta are:

A care should be taken to not take Cymbalta with several other medicines such as antibiotics, blood thinners, and other antidepressants.

The biggest drawback of taking Cymbalta is that it increases the risk of suicidal thoughts in patients.

Cymbalta may be taken in 20-60 mg dose, and pregnant and nursing mothers have to take extra precaution when taking Cymbalta.

Here is the result summary of Cymbalta clinical trial: It was no surprise when Cymbalta makers quietly settled the lawsuits without going into the trial.

Savella works by controlling the individual chemicals in the brain called neurotransmitters.

The common side effect of Savella is:

As per clinical trial on Savella users:

Savella was not immune from the lawsuit due to its serious side effects.

In 2010, Public Citizen, a non-profit consumer advocacy group, petitioned the FDA to remove the Savella from the market due to serious side effects and increased risk of causing high blood pressure.

It was estimated that Savella users had more than 20% risk of developing the high blood pressure compared to patients who took similar medicine.

The above results were the clinical test conducted by these drug manufacturer, and their test results showed that these drugs have more side effects than the benefits it can provide to the user.

What about the users of these fibromyalgia medicines? Do they have the similar conclusion to make?

The National Pain Foundation conducted a survey of 1, 339 people with fibromyalgia condition to test the effectiveness of Lyrica, Cymbalta, and Savella.

Some of the highlights of the report are:

Based on the users of these fibromyalgia prescription drugs, only 10% users find that it was effective in curing their fibromyalgia symptoms.

So, if the effectiveness rate of these medicines is so small, why are doctors are still prescribing it?

It's all about money!

As per the article by Oliver Wright, Big Pharma lobby hard with regulators and doctors to make them prescribe these medications.

These big Pharma companies make billions of dollars in revenue from these medicines, and it is in their interest that physicians keep prescribing these drugs to their patients.

Large drug manufacturers keep their medicines patented so no generic medicine can be made and then they lobby hard with the regulators and physicians to get their drug approved.

In return, they sell these drugs at inflated prices even if the benefits are often limited or unproven over existing therapies. As per the study conducted by Fred Wolf﻿﻿e﻿﻿, M﻿﻿.D of the National Data Bank for Rheumatic Diseases, he stated that although these drug manufacturers spend the enormous amount of money advertising these medicines, the research data show that the improvements in fibromyalgia symptoms are minimal.

He recommends that fibromyalgia treatment alone with prescription drugs should be discouraged and the multi-faceted treatment approach which includes alternative therapies such as exercise, physio, diet regulations and lifestyle changes should be included to provide substantial and long lasting relief from fibromyalgia symptoms.

There is no denying that fibromyalgia is still illusive illness and we still don't know what causes it. It makes finding the relief from fibromyalgia symptoms to be hard.

No permanent cure of fibromyalgia can be possible without first identifying the underlying cause of it.

Many drug companies are pushing the band-aid medical solution to treat fibromyalgia. These drug manufactures even got caught up with regulators for false and misleading information about the effectiveness of their drugs.

They know the side effects of these medicines are far more than any relief it can provide in the patients, but as long as they can prove to the regulators that there might be some who can benefit from these medicines, they can continue selling their drugs and make a larger profit.

You have to take care of your health in your own hand.

The first step is being aware of the effectiveness of these conventional medicines and whether you tend to gain more relief from your fibromyalgia symptoms than dealing the unintended side effects.

Many fibromyalgia patients have reported that combination of medications and including the treatment of overlapping symptoms such as a migraine, muscle inflammation, and irritable bowel syndrome with massage, yoga, walking, swimming, and other light exercises can be helpful in providing relief. Use of supplements such as Omega 3 fatty acids and magnesium have shown promising effecting controlling some of the fibromyalgia symptoms.

Above all, the emotional support from friends and family members are important to reduce stress, and depression fibromyalgia patients face due to persistent pain and fatigue.

At last, living with chronic pain is hard and frustrating.

Learning effective pain management and coping strategies can help you to control your pain response.

Other pain management techniques such as deep breathing, positive outlook and getting the help of a psychologist to help you manage depression can bring some relief from the fibromyalgia symptoms.

What is your thought about the role of big drug manufacturers on the overall well being of their users?